5 Motoring Lessons We Learned on our Summer Holiday

One of the Volante team has just returned from her summer holiday and has these 5 motoring lessons to report:

When we first heard the news that the DVLA would no longer issue photocard licence counterparts (from 8th July 2015), we were delighted.  The DVLA were moving their systems online and we would no longer be asked for it when we hired a car.  However, our delight was suddenly replaced by panic as we were told we would need a special code when hiring a car, especially abroad. And who knows what would happen if we didn’t have it? Delays, and likely no car hire!

Despite the panic and warnings that we wouldn’t be able to hire a car abroad without the new code, the car hire company didn’t even ask for it.  We didn’t think they would but, as they say in the Boy Scouts, it’s best to “be prepared”.

And further good news on that front, the DVLA have extended the window in which the code will be valid from 72 hours to 21 days.

Check the car for scratches – film the car and keep a record.  Although, they don’t always seem to care as one gouge on a previous holiday was fondly named a “Sicilian scratch”.  Oops!

We were delighted we didn’t have to use the wobbly sat-nav we’d dragged from home and that the Clio we hired had Sat-nav built in (and could be programmed into English – bonus!).  Not so delighted when a warning spanner came on accompanied by this message: 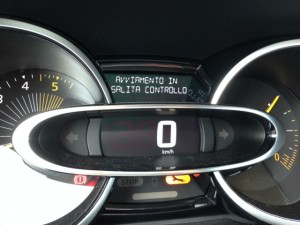 And even less delighted when the car manual was only in Italian and didn’t contain the error message!

We were very happy though with the nice man where we were staying who kindly took us to the local Renault garage so we could get the car checked over.  It turned out it was just a warning sign about using more power because of going uphill.

We had to bring the car back with the same amount of petrol/diesel that was in it when we took it.  We should have made a note of mileage to calculate the usage so we didn’t waste any.  This is noted for future car hire.

5. Beware of the signs

When you see a parking sign, don’t just park there, check what it means.  We almost got ticketed by a traffic warden because we didn’t have a sign to say when we had parked there.  Luckily we got away with writing it on a piece of paper.

So, enjoy driving on your summer holidays. But be prepared!