5 Reasons Why You Shouldn’t Run On Empty 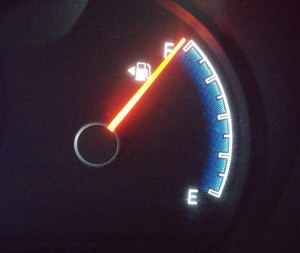 Do you ever find yourself driving with just a dribble of petrol in the tank, hoping you’ll make it to the next petrol station? Or the ping of doom goes off to tell you you’re down to your last litre! Many of us do. But new research shows that it can actually be dangerous to drive with very little petrol in the car. We’ve done our research so you don’t have to, and put together a list of reasons not to run on empty, and a few tips for driving efficiently:

Petrol engines can cope a little better but the damage can still be caused by the build-up of air in the engine.  It             can prevent the fuel moving around the engine and keeping it running smoothly.  Another expensive garage                 bill.

So, how do you preserve fuel? Here are some top tips on driving efficiently.