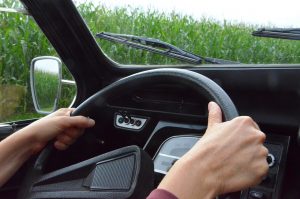 You may know the Highway Code but do you know what you can and can’t do whilst driving?  Some of you may be surprised to learn that driving in flip flops could invalidate your car insurance but what about other common scenarios?  MEB are here to bust some car driving myths.

Can I have the light on in my car?

This scenario may seem familiar to you… It’s dark, your passenger needs to look at map so puts on the interior light.  After a few minutes you ask them to switch it off as you say that drivers mustn’t have their inside lights on when they are driving.

This is actually a myth, also there is no law stating this but it can be distracting to the driver as it can cause glare on the windscreen.  Again if you are pulled over, the police officer can ask you to turn it off as they believe it is a distraction.

Does the 10% speeding rule exist?

Until recently UK motorists were allowed some leeway on speed due to inaccuracies in equipment that measures speed such as the car’s speedometer.  However it was never an excuse to speed.

Since April 2017, new speeding laws were introduced in the UK and they are much tougher than they were before. Now, if someone is going at 71mph on a motorway they could face a Band A fine which is around 50% of a weekly income, and 3 points on their licence.

Our advice, stick to the speed limit!

Women are better drivers than men

We don’t want to get into a gender-slanging match but let’s look at this myth objectively. There have been many studies out there and according to Octagon Insurance, women are better drivers.  Although you can then take a look at Cheap Car Insurance who argue in 10 ways that men are better drivers than women.  Until a study looks at every factor involved in driving, we think it is too close to call.

Women may have been put off by the news that they would no longer be automatically given cheaper car insurance but actually it now means that insurance is based on the individual rather than the gender.  This then renders this myth as false.

Cast your minds back to your driving lessons.  Do you remember what your instructor said about hand placement?  Perhaps you practised on a dinner plate when you weren’t in the car?  You need to get to grips with the wheel and the “10 to 2” was the preferred method as taught back in the day.

However since cars virtually all now have power steering (thank goodness), placing your hands at 9 and 3 is the more comfortable and sensible method.

What’s your favourite car driving myth?  Do let us know by tweeting us @mebmotors