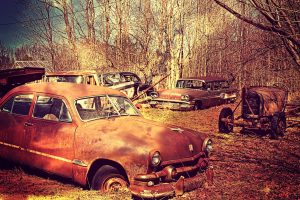 It seems that not a week goes by without a mention of a car scrappage scheme in the motoring press.  If you are thinking of changing vehicles is it worth investigating a scheme for your old car?

What are scrappage schemes?

Car manufacturers are offering discounts on cleaner models, encouraging you to part ways with your less environmentally-friendly banger.  Most of the cars traded in will need to be scrapped because they are higher-emission models and the idea is that if these are removed from the road then air quality will be improved.

Here’s how it works

Since the Volkswagen diesel emissions scandal of 2015, car manufacturers and governments have been thinking of ways to reduce vehicle pollution.  The UK government considered a scrappage scheme to get rid of the top polluters but settled on a diesel tax instead.

However, in 2017 car manufacturers launched trade-in schemes for both petrol and diesel models, giving the traders discounts on buying cleaner new models.  These schemes were supposed to last to the end of 2017 but have been extended into 2018 in a bid to revive the car sales market.

You could receive up to £8,000 for your old car and therefore this eases the financial burden of trading up to a new model.

How to pick the best manufacturers scheme in 2018?

In 2017 no less than 26 car brands launched schemes with over half being extended until March 2018, six of which have been extended until June.  It could very well be that if the car market continues to be slow then many of the other car brands may well bring back old scrappage schemes (or introduce new ones) to try and boost sales.

What you need to know is that different manufacturers have different rules on their schemes with different amounts offered as part of their trade-in deal.

Some will give a fixed scrappage trade-in value for your old vehicle whereas others will give you a scrappage incentive plus either a trade-in payment or a deposit contribution discount on a PCP finance scheme.  Shop around as you could save thousands by choosing the scheme that gives the highest price for your car.

Some schemes don’t look like good value since you are losing your existing car but others give you extra discounts (compared to standard deals) which really goes to help afford your new car.

For the most up-to-date information on current scrappage schemes take a look at this article on What Car which has listed ones which are running until 30th June 2018.

Before entering into a dialogue with a car manufacturer, have an idea of what your current car is worth.  Have it valued as you may end up getting £5,000 in a private sale versus a £3,000 discount to trade your car in and see it taken to the scrap heap.

If you are a diesel owner then you will be aware that from May new MOT rules are coming into force which will automatically fail any diesel which has a faulty diesel particulate filter, or has one removed. A diesel particulate filter (DPF) works to remove the soot from the exhaust gas of a diesel engine – the dirty part of the emissions that causes damage to health. With this in mind, you may very well be seeking out a favourable scrappage scheme for your old car.