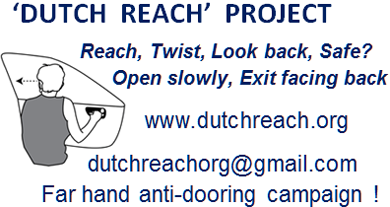 When we were looking at new driving laws for 2019, we came across a campaign for Dutch Reach to be included in the Highway code, in order to protect pedestrians, cyclists and motorbike riders from being “car doored”. Like many of you out there, we were unfamiliar with this method and thought it worth investigating for our blog.

What is the Dutch reach method?

The “Dutch reach” method is a practice used by both drivers and passengers to use their far hand to open the car door. In 5 simple steps, those in vehicles can help avoid collisions by:

Drivers and passengers reach across for the door handle, using their far hand. They are forced to swivel and therefore you automatically look out, and back for oncoming traffic and pedestrians. Once the view is all clear, you can then open the door slowly whilst remaining vigilant.

For over 50 years, Dutch children have learnt this method from parents and in schools. It is also taught in driving lessons, so it is about time the UK learnt it too!

Why Introduce it to the UK?

In October 2018 it was announced that a set of measures were going to be introduced to the Highway Code in order to protect cyclists on UK roads. Unfortunately “car dooring” is on the rise in cities including London. It was first brought to the wider-public’s attention in 2016 when Chris Grayling (transport secretary) was caught in his own “car dooring” incident when he knocked a cyclist off a bike in Whitehall.

With the public being encouraged to walk or cycle more, measures need to be put into place to ensure the safety of cyclists and pedestrians, and this includes using Dutch reach.

The organisation also recommends the code should require vehicles to give way to pedestrians and cyclists when turning. They also want rules on cyclists attire to be changed. Cycling UK think that If the general advice is for cyclists to wear fluorescent clothing and helmets then it deflects the responsibility from drivers when there is a collision and promotes “victim-blaming” if the cyclist wasn’t wearing something bright and reflective.

Royal Society for the Prevention of Accidents (RoSPA) advice

According to RoSPA there were 18,477 cycling casualties in 2016. A number of these could have been avoided if Dutch reach had been put into practice. Here are some tips for drivers:

So it looks like adding Dutch reach to the Highway Code can only be a good thing if it is going to improve road safety.