Since relocating from Crouch End to Edmonton, we are getting used to the new sights and surroundings of Edmonton.  If you were to bring your car up to N18 for a service or MOT then what are you likely to find around the Landmark Commercial Centre?

Welcome to our guide to Edmonton! 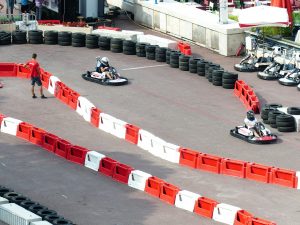 Now most importantly to motoring enthusiasts such as us at MEB the Motor Centre is TeamSport Go Karting North London. We love to spend our spare time racing each other on this multi-level 800m go kart track in North London.  If you become a regular, take advantage of their #Grid membership club, giving you 10% off at all of their tracks, and loads of other perks.

Just a 15 minute stroll away from our new site in Commercial Road is Pymmes Park.  Originally a private estate, in 1589 Robert Cecil spent his honeymoon here. Edmonton Council acquired the estate and in 1906 it was opened as a public park.  Sadly Pymmes House was destroyed in the Second World War by fire.

If you are a fan of blue plaques then you can see one dedicated to John Keats, the poet at Keats Parade.  The poet had been apprenticed to a surgeon in Church Street between 1811 & 1815, the house being knocked down in 1931 and Keats Parade erected on its site.  The other blue plaque is in honour of writers Charles and Mary Lamb who lived in Bay Cottage (Lamb’s Cottage).

John Gilpin is Edmonton’s literary hero.  Read about him in William Cowper’s 1782 poem, “The Diverting History of John Gilpin” and how he never gets to spend his twentieth wedding anniversary at the Bell Inn in Fore Street. Although the pub is no longer there, the local Wetherspoons is named in honour, Gilpin’s Bell public house opposite the site of the original inn. Gilpin is also remembered in Edmonton in statue form at Fore Street and the 1950s council housing Gilpin House in Upper Fore Street.

Did you know that Edmonton is split into Lower Edmonton (N9 confusingly the northern part of Edmonton) and Upper Edmonton (N18 the southern part!).

The main Roman road from London to Lincoln and then onto York passes through Edmonton, Ermine Street.

If you are finding lots of references to Edmonton in Canada then you might be interested to know that Sir James Winter Lake set up a trading outpost of the Hudson’s Bay Company there, naming it after his home town in England.  Edmonton is now the capital of Alberta (Canadian province).

So we now think you are culturally enriched enough to enjoy your time in Edmonton whilst you are waiting for your car to be serviced.  Please do book yours soon on 020 8340 0656.