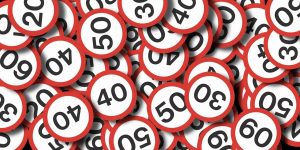 April 2017 saw the introduction of new speeding laws in the UK and they are much tougher than they were before.

After a period of consultation, the Sentencing Council decided to introduce the changes because it felt the currently punishments did not reflect the potential harm speeding can cause. You can read the official guidelines here.

The new laws equate to an almost zero tolerance policy on speeding. Whereas previously police would have allowed a margin of error previously, for example 35 in a 30 zone, now this will not happen.

Now, if someone is going at 71mph on a motorway they could face a Band A fine which is around 50% of a weekly income, and 3 points on their licence. As the speed increases so does the punishment – but there is less room for error. So not only will drivers be facing harsher fines, they could find themselves being disqualified! This has brought some criticism, particularly for motorway driving. For one, it is thought drivers will focus more on their speedometer than on the roads. Which is a valid concern seeing as going just 1mph over the speed limit could see them with points on their licence. A driver will want to make sure they are sticking to the limits.

The legal speed limit on a motorway is 70mph but according to statistics the average speed is actually 85mph. However, under new laws drive at 85mph and be caught by a camera and you could face a fine of 100% of your weekly income, 4-6 points or even a short disqualification. It is said that there is no need for this as according to driving experts the UK already has the safest roads in Europe.

These changes come about as part of a shake up in road traffic laws. We have recently seen bigger fines for those using mobile phones at the wheel (see previous article), an increase in the prison sentence for those convicted of causing death by dangerous driving and more measures are set to be introduced in relation to drink driving and driving without insurance.

What do you think? Should UK drivers be punished for driving 1mph over the speed limit?