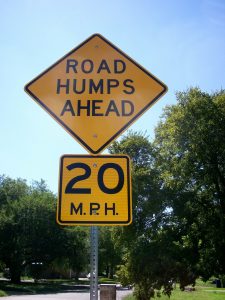 Love them or loathe them, speed bumps are part of our road system.  But are they the best traffic calming method?

Speed bumps are commonly used to enforce a low speed limit (around 25 mph).  They might be good at keeping speed limits low but can cause problems such as traffic noise, damage to cars and slow down emergency vehicles. They also are a hassle to sports cars (plus others with low ground clearance), cyclists and motorbikes.

In the UK we have four different types of vertical deflection in highways:

One in five drivers have experienced car damage from speed bumps with an average repair bill of £144.

Car drivers can claim for damage if the speed bump is larger than the legal requirement (no higher than 100 millimetres) but it is more difficult than claiming for pothole damage.

The most common type of damage is tyre related – damage to the inside shoulders (damage can’t be easily seen) can lead to blowouts on high speed roads. Other issues include suspension issues (broken springs, shock absorbers having to be replaced), damage to steering and vehicle sumps (can wreck engines and cause dangerous oil spillages).

Since cars can be damaged by speed bumps, what can be done to avoid this?

There are things that the local authorities can do:

There are things that drivers can do too.  Driving slowly over speed humps can avoid damage to  your car.

NB if you are driving regularly over speed cushions then you can increase wear on the inner should of your tyres.  Get this checked out at your next service.